What is electromagnetic radiation?

Why do you need an electromagnetic radiation protective head cover?

Electromagnetic wave radiation has been listed by WHO as the fourth largest source of environmental pollution after water, atmosphere and noise. It has become an invisible “killer” that harms human health. The nervous system is very sensitive to the effects of electromagnetic radiation. After repeated effects of low intensity, the function of the central nervous system changes, and neurasthenia syndrome occurs. It mainly has headache, dizziness, weakness, memory loss, sleep disorders (insomnia, dreams or Drowsiness), dozing off during the day, irritability, sweating, palpitations, chest tightness, hair loss, etc., especially difficulty in falling asleep, weakness, hyperhidrosis and memory loss are more prominent, all of which indicate that the brain is dominant in the inhibition process, so the victim In addition to the above syndromes, there is also a short-term memory loss, the visual motor response time is prolonged; the hand-brain coordination movement is poor, the performance slows down the digital recording, and there are more errors.

The Swiss standard requires safety within 2mGs outside the 2m range of appliances. The human body can only withstand 2mGs radiation, but it is said that all kinds of household appliances: mobile phone 200mGs, computer 20 ~ 40mGs, copier 40mGs, microwave oven 200mGs, hair dryer 100mGs, TV 20 ~ 40mGs, refrigerator 20 ~ 40mGs. Studies have shown that long-term effects of electromagnetic radiation above 2mGs can cause illness in humans.

Applicable to the crowd:

The products we sell:

The silver fiber radiation protection mask is a high-tech product obtained by permanently bonding silver to a fiber surface through a special technique. This structure not only makes the silver fiber maintain the original textile property, but also gives it all the The magical function of silver, the magical effect of silver fiber. Silver has the most effective antimicrobial properties. Silver fiber radiation-proof fabric made of silver-containing fiber using nanotechnology is the latest radiation-proof technology in the world after metal anti-radiation fiber cloth. It has the functions of radiation protection, anti-bacterial and anti-fouling, is the production of radiation-proof mask ideal fabric. Its anti-radiation effect is superior to radiation-proof fabric made of other metal materials, which can be worn close to the body and beneficial to the human body.

The maintenance method of silver fiber:

Silver fiber exposed to the air can not avoid oxidation, the fabric will be black or yellow, is a normal phenomenon, does not affect the shielding effect. To reduce the oxidation of washing, it is recommended to keep the head and face clean when using, if do not use, it is recommended sealed.

1. It is recommended to wash with well water, mineral water, pure water; (Reason: Some tap water contains chloride ion, and if the chloride ion is excessive, it is easy to react with silver to reduce the damage to silver by alkali and chlorine)

2. Modest amount of neutral detergent, washing for a short time; (Do not use acidic detergent or laundry detergent)

3.Can not rub and washing machine wash. Can not be bleached, After washing, you can't wring it, pick up directly from the water and hang it in a ventilated and dry room, avoid exposure;

4. It is recommended to wash or wash as little as possible to prevent improper washing effect of shielding.

My anti-radiation masks are protected against electromagnetic waves generated by the sudden increase or decay of electric currents in electronic components, and are not anti-cell-phone signals.

Ignite the attached fabric sample and find that the burnt sample is a very clean and fine network metal, which indicates that the fabric is very good in material and can effectively shield the radiation.

The attached fabric sample is ignited and burned to a black globule after being completely burned with fire. After being crushed by force, it can be turned into a powder, which indicates that the material of the fabric is very good and can effectively shield the radiation. 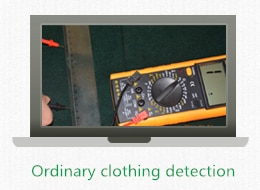 The multimeter is adjusted to the 200Omega or 2KOmega position. When the multimeter pen is in contact with the test fabric and the distance is 10cm, the resistance value is 1 and the value of the multimeter when the object is not tested is 1, indicating that the ordinary fabric is non-conductive. 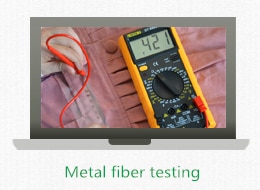 The multimeter is adjusted to the 2kOmega gear position. When the multimeter pen is in contact with the test fabric and the distance is 10cm, the resistance value fluctuates around 0.421KOmega, indicating that the metal fiber radiation protection suit has conductivity, so it has anti-radiation effect. 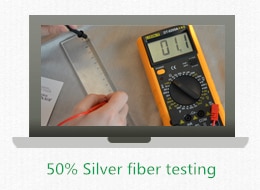 The multimeter is adjusted to the 200 Omega gear position. When the multimeter pen touches the test fabric and the distance is l0cm, the measured resistance value fluctuates around 1.1 Omega, indicating that the conductivity of the 50% silver fiber radiation protection suit not only is better than that of the metal fiber but also the radiation protection effect also better than metal fiber. 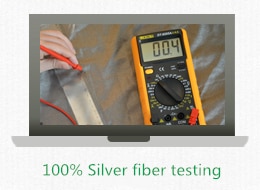 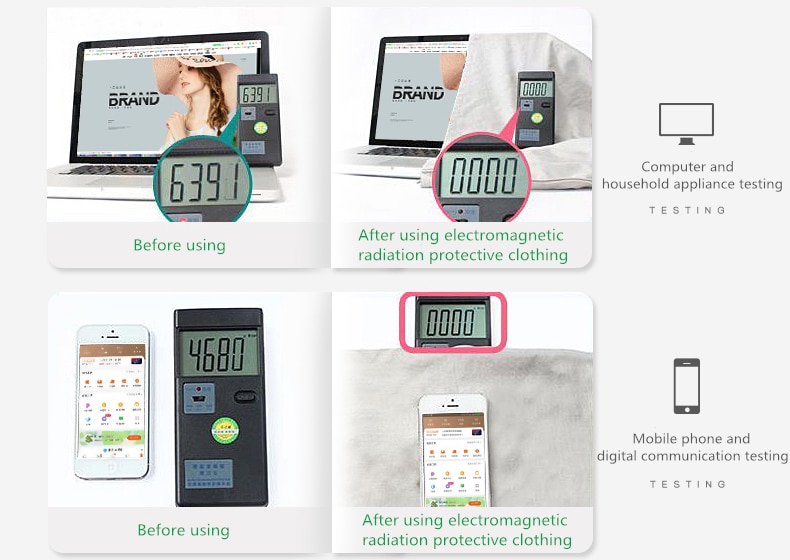 The second step: use radiation suits to block the back of the chassis, in the middle of the radiation equipment and the rear of the host computer to block a layer of radiation protection suits, then see the display on the instrument value is 0, indicating that the host computer's electromagnetic radiation is radiated Clothing shielded. 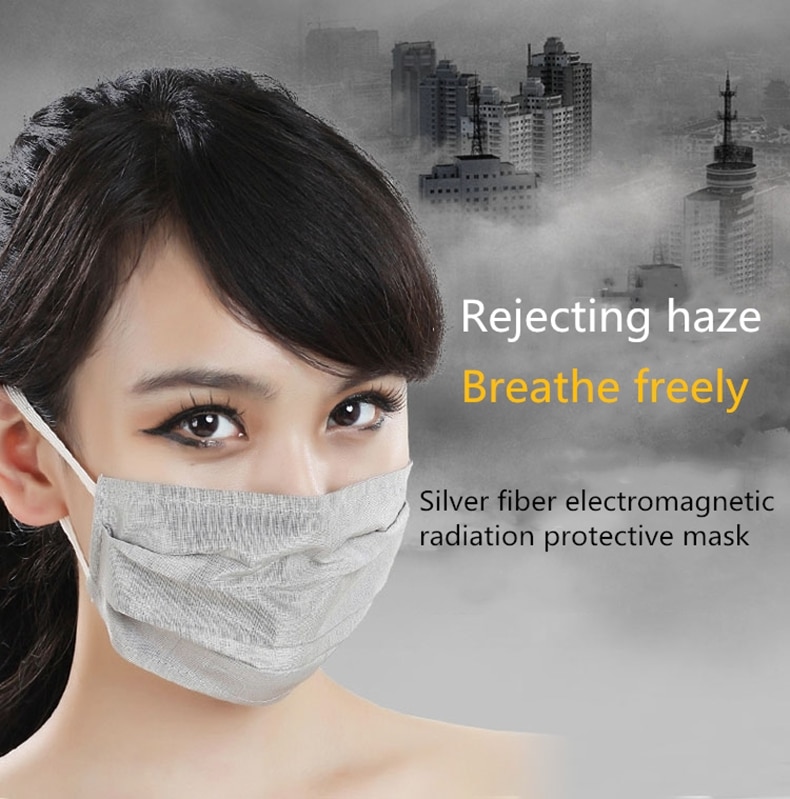 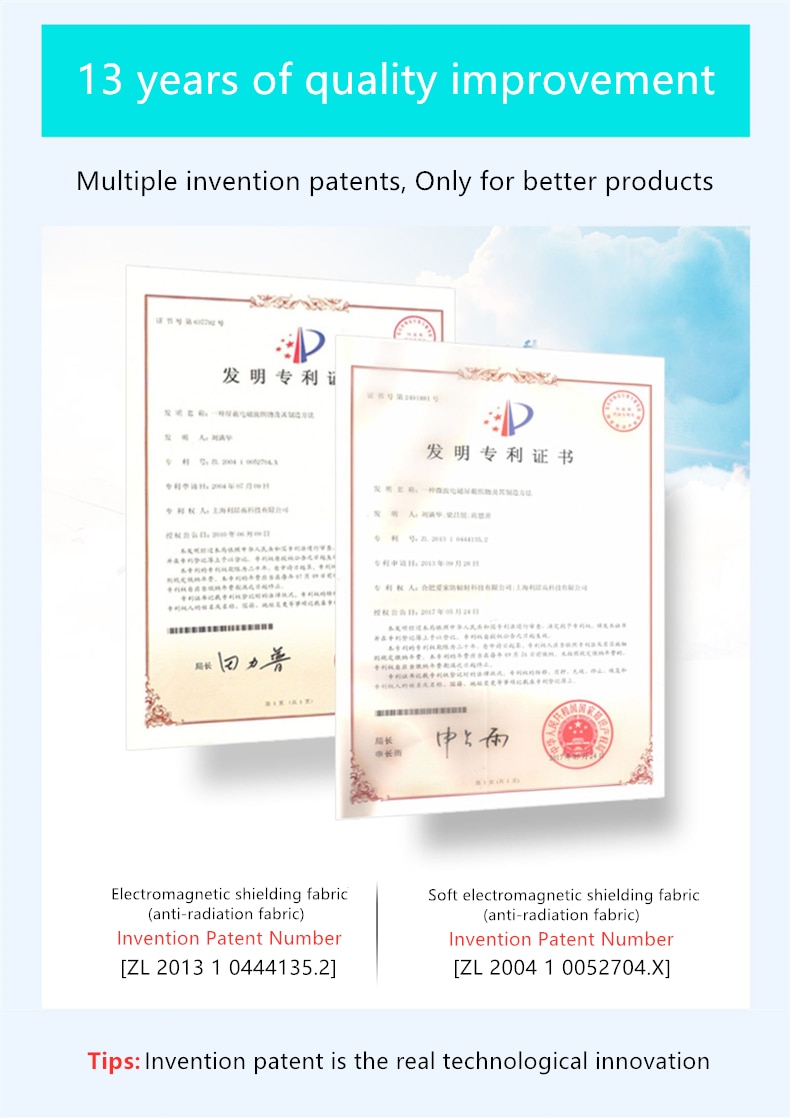 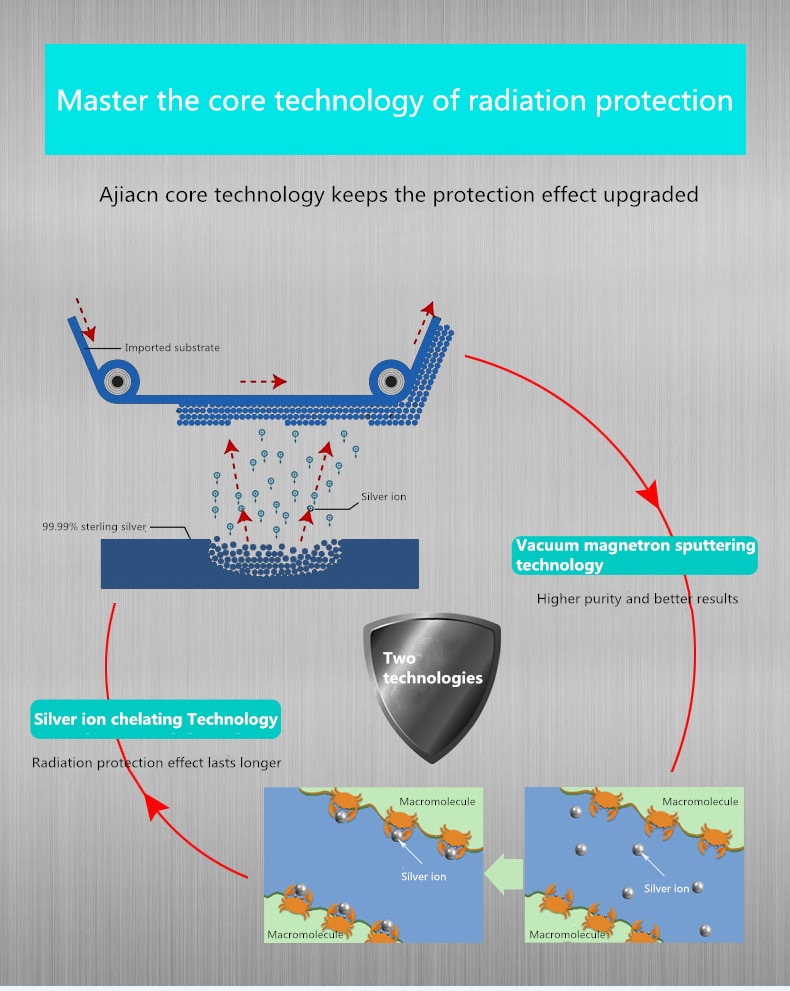 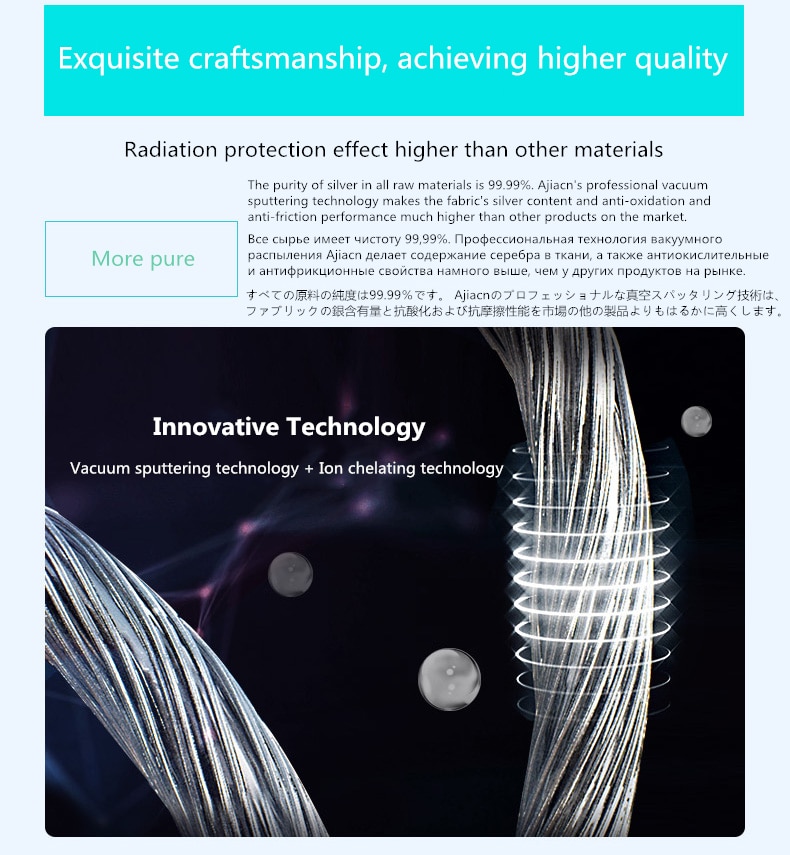 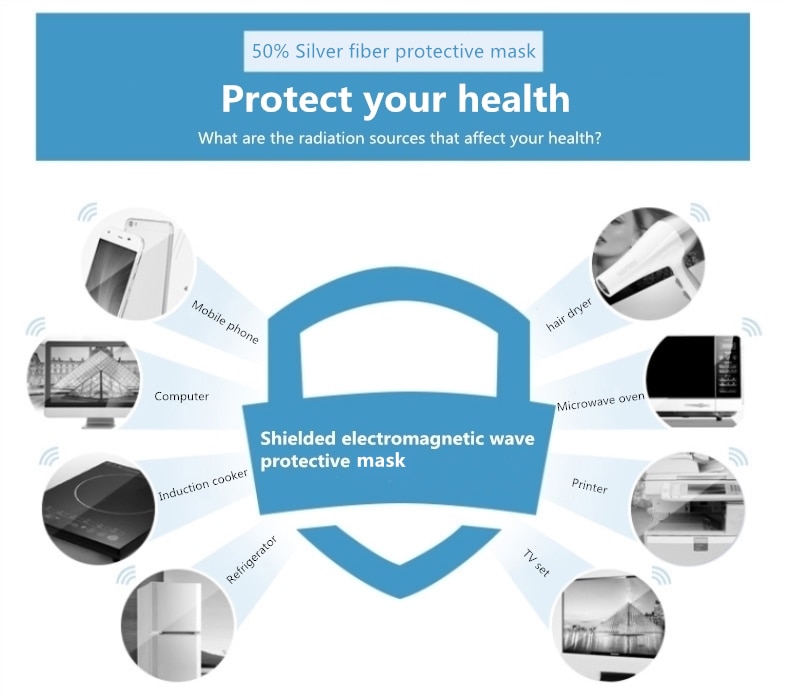 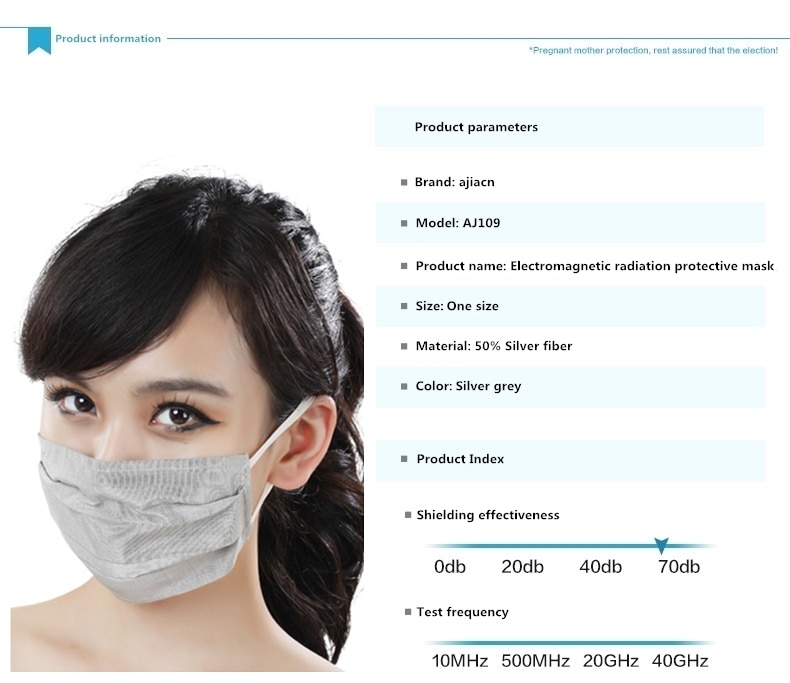 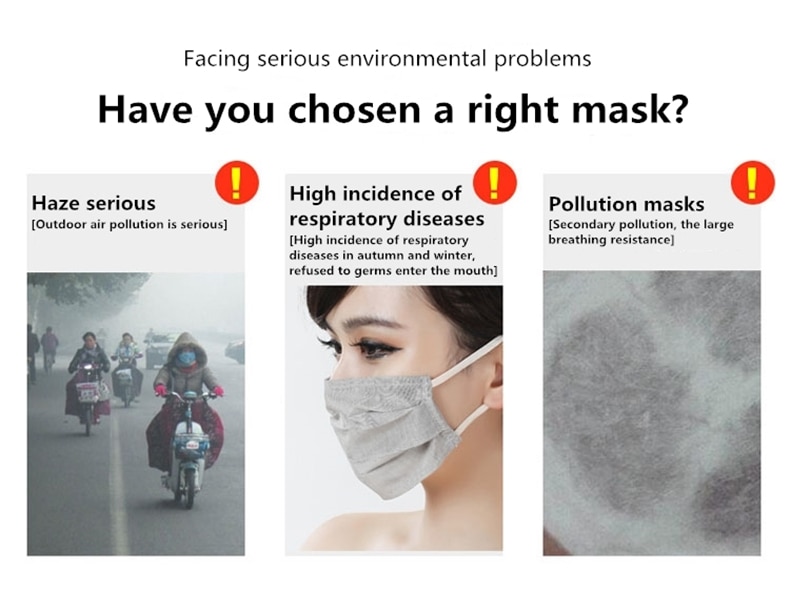 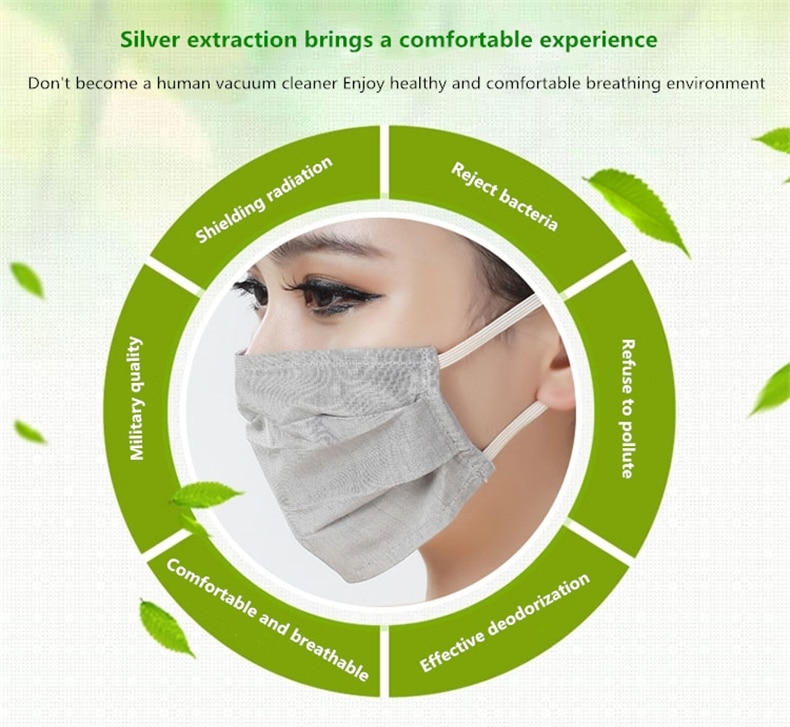 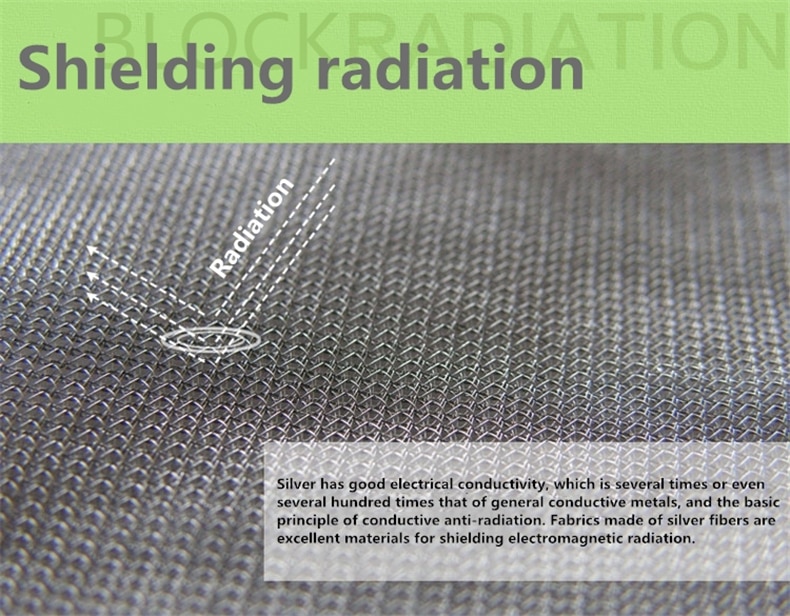 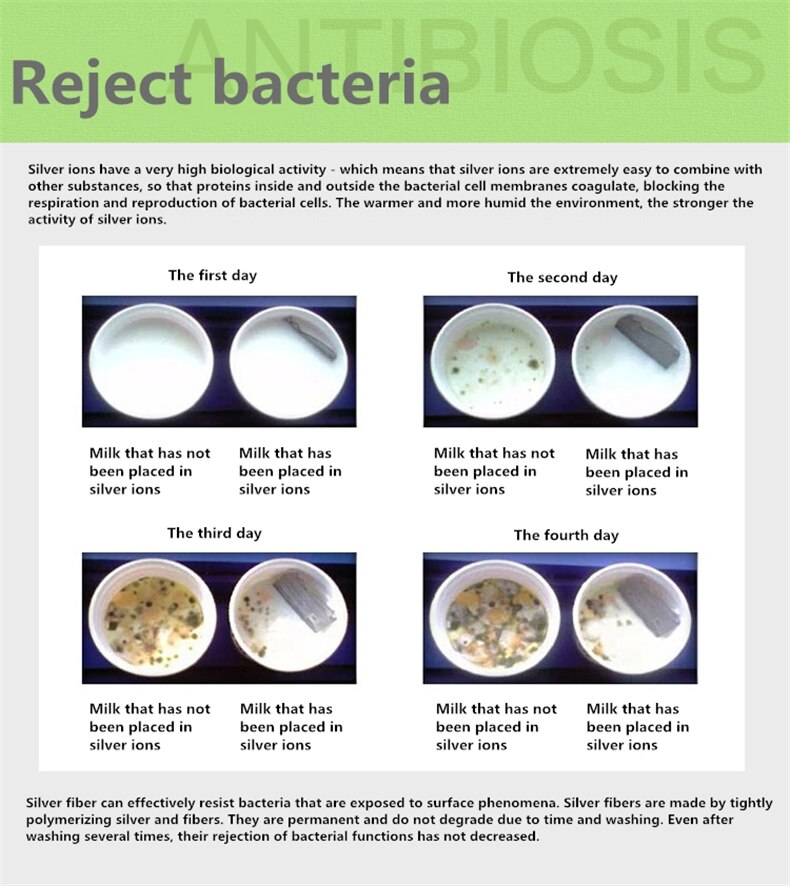 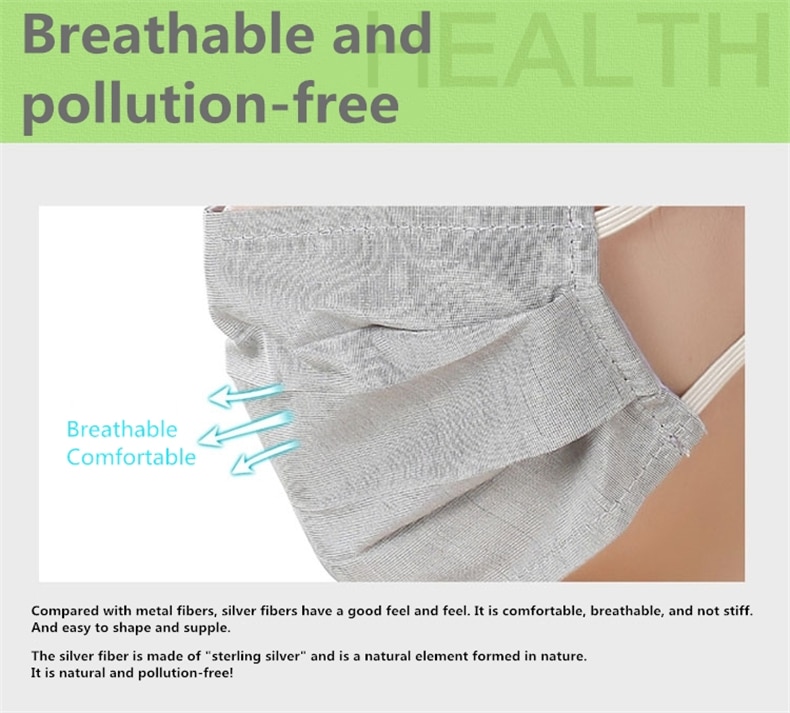 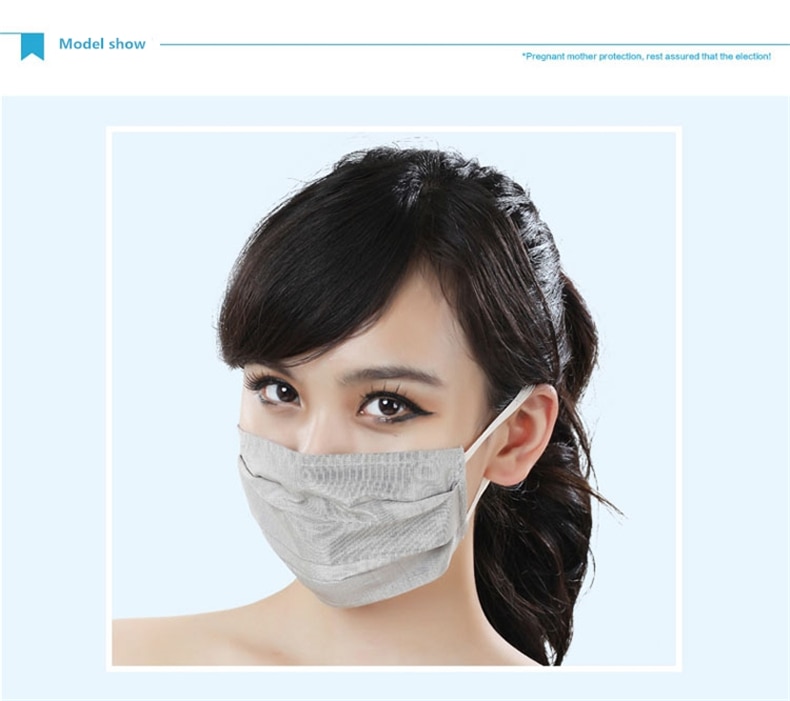 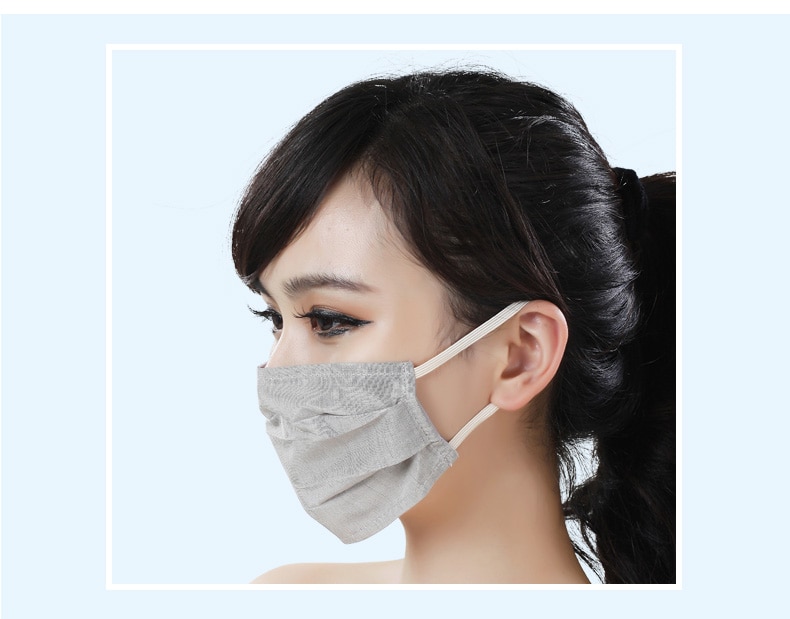 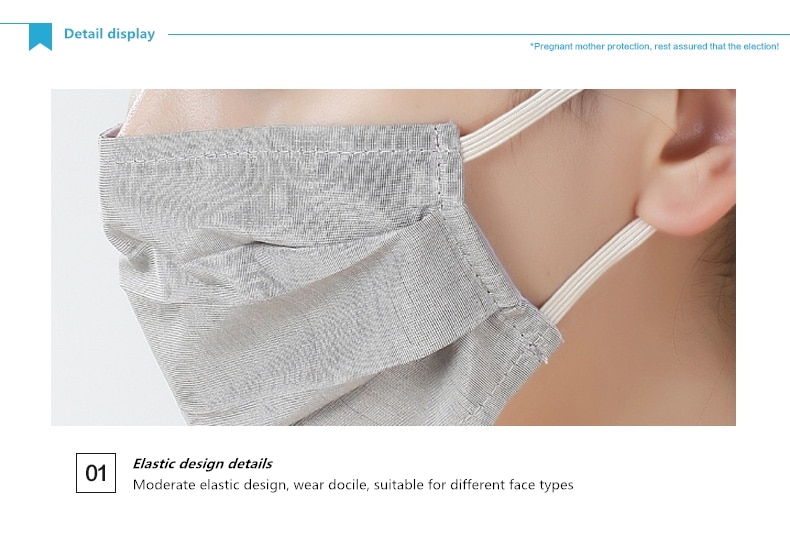 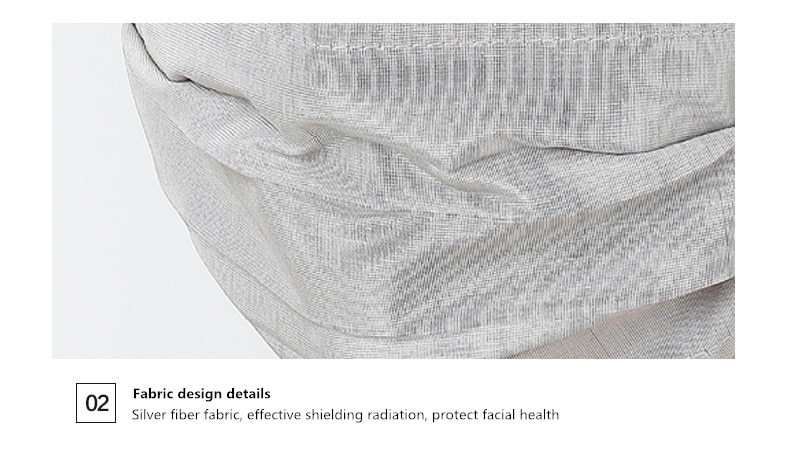 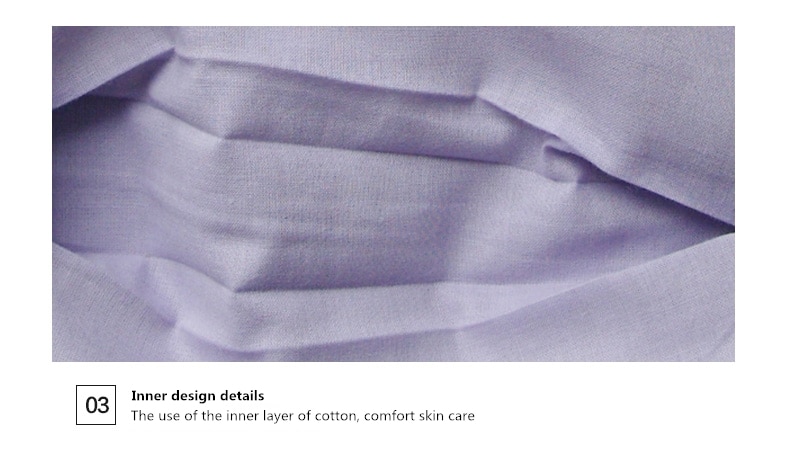 Please check the size chart in the product page, carefully measure yourself  in centimeters, and double check that you are indeed ordering the correct size.

If you are in between sizes, choose the next size up. If you are still not certain please contact us at info@freereturns14.com prior to placing the order and we will advise you accordingly.

Shipping Times do not include the 1 to 5 business days for processing and packaging the order and do not include additional times when orders are placed during statutory holiday times. Items shipped to the following countries ONLY!  Australia, Canada, France, Germany, Israel, Italy, Netherlands, Poland, South Korea, Spain, Russian Federation, Saudi Arabia, United Arab Emirates, United Kingdom, United States
No hidden fees. No hassles.You have fourteen days (14 days) from the date of delivery to return an unused, unwashed purchased item. This can be for any reason.Contact us by email and we will begin the return process by providing a free local return shipping label with tracking number. Print it off, then take it with the sealed package to your nearest postal office. Once the returns warehouse confirms receipt of the item sent back, a full refund will be issued. Free local return labels are only available within the following 15 countries: United States, Canada, Australia, United Kingdom, France, Spain, Germany, Russia, Israel, South Korea, Saudi Arabia, UAE, Poland, Netherlands and Italy.

Rest assured there are truly no shipping costs incurred by our customers. Shipping is always free because we choose to cover the costs. In addition, customers are provided with valid tracking numbers and functional tracking links.

As our customer, you can buy from us secure in the knowledge that for any reason, from the time of delivery, you have 14 days to contact us , print off your Free Return Label and send your purchase back to us at our expense.

We offer free local returns within the country of delivery, if for whatever reason, you decide to return your puchase. This means the processing time of returns is considerably shorter so your refund arrives faster.